Twenty years ago finding organic produce in a major grocery chain was like finding a needle in a haystack. Now the rise of grocery chains such as Whole Foods, Sprouts, and Earthfare are painting a new face on the organic/natural food industry. And while these stores offer a unique shopping experience many people overlook the arduous process that it takes to get food from farm to store. Farmers are some of the world’s greatest unsung heroes but most often their stories go untold.

Just south of Atlanta, Chris Edwards, along with his business partner manages Mayflor farms, an 11-acre commercial farm located in Stockbridge, GA. While most people would consider urban agriculture to be a movement of sorts, Chris maintains that it is a trend. “For most people they’ll get involved but it will pass”, he says. And though these words may be harsh it is an undeniable truth. If it’s not a culture, it’s a trend. You may be thinking, what defines a farmer’s culture? If the vision of an old man in overalls standing in the middle of a cornfield somewhere in Iowa pops in your mind then you may want to revisit your idea of the modern farmer. Most farmers aren’t just farmers. Chris, for example studied Ethno-botany, which not only gave him a scientific approach to growing and farming but a cultural perspective. We fail to realize that despite our advanced technologies, nature is the master architect and within her the greatest technology known to man evolved, agriculture.

Most nations that are considered “developed” and “under-developed” rely on agriculture to sustain its society. Why then is agriculture becoming a thing of the past? “My enemy is ignorance”, Chris bluntly states and sadly, we all share a common enemy.

Ask yourself, where did the last meal you had come from? Where was it grown? How long did it take to get from farm to table? Most people don’t know, let alone care to know which begs the question, has our culture become one of ignorance?

Luckily, farmers such as Chris are lighting a torch of change. Though Mayflor farms boasts a honey harvest of 40lbs in it’s first year and a bountiful harvest with an assortment of produce, the ultimate vision is for it to be a learning institute. Farming is a holistic experience, the intricacies and balance that nature possess mirrors our lives, if only we look into the mirror. There’s so much to learn from the earth. So much that is still left to discover. But as Chris reminds us, “You can’t just do it on the weekend. Those that see it understand; I demonstrate with my lifestyle.” 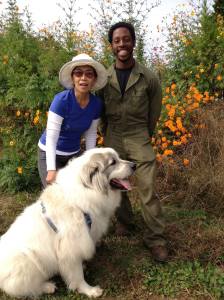 One thought on “It’s a culture not a trend”