Farmer Noah White’s story is the definition of Sankofa, go back and get it. A scholar with a passion in sports, music and a full time career in the corporate world. 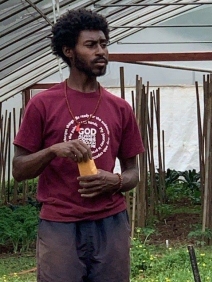 Rather than continuing his corporate ventures, Farmer Noah began working with Truly Living Well. He became a camp counselor and was reintroduced to his agri-culture. Noah went through training programs and decided to switch careers to become a full time farmer at Truly Living Well. He has also shared his talents to Gangsters to Growers, a program focused on empowering at-risk youth and our formerly incarcerated through agriculture, employment, and entrepreneurship. They provide agricultural based paid entrepreneurial internships for at-risk youth, gang members and formerly incarcerated individuals to give them a chance to participate in the legitimate economy.

How exactly did this athlete and musician end up with soil in his hands, planting and growing onion, eggplant, okra, lemongrass and fruit?

Some say it is the genetic memory coded in the blood that could thrust anyone into a purpose in life, a purpose once forgotten or unknown. A purpose one could have never imagined until it is manifested, staring at your spirit front and center, living in bliss, doing what you love.

In psychology, genetic memory is a memory present at birth that exists in the absence of sensory experience, and is incorporated into the genome over long spans of time. It is based on the idea that common experiences of a species become incorporated into its genetic code, not by a Lamarckian process that encodes specific memories but by a much vaguer tendency to encode a readiness to respond in certain ways to certain stimuli.

Full circle we can watch Farmer Noah kneel down at the agriculture altar built by his forefathers and mothers, who represent the dominant Mississippian culture of the Cherokee Indians. The Mississippian peoples were excellent farmers. Notably, Cherokee women and men planted and harvested crops, including beans, squash, corn, tobacco, and sunflowers. They supplemented their diets with acorns, nuts, seeds, and fruits. Since they did not use any fertilizer, they had to burn the fields and create new ones every season. This required immense amounts of time and labor but ultimately led to large crop yields.

What is so excellent about this ancestral connection within the White family is the lineage to sustaining the land even through the terrors of colonization. In today’s economy Black indigenous farmers still are under a colonial threat to keeping their land. For example, every year, Black farmers nationwide lose 30,000 acres of land primarily because of discrimination, lack of estate planning, eminent domain and tax liens.

Anyone may ask themselves how and why these laws were made possible? The answer is Henry Blair.

Henry Blair, like Noah White is also an indigenous American. Blair was native to Montgomery County, Maryland. He was born a free man and operated his own independent business as a commercial farmer, near Glen Ross, Maryland. Although Blair couldn’t read or write English, he invented and holds two patents for the corn seed planter, and the mechanical cotton planter. Blair’s inventions were the two blueprints to the beginning of the legacy of John Deere. Ironically after Blair received a patent for a “Cotton-Planter”; cotton seed planter on August 31st, 1836, the very next year Deere developed, and manufactured the first cast-steel plow.

Blair’s inventions improved the productivity of corn and cotton agriculture.

Blair’s corn planter resulted in more efficient crop planting and resulted in greater overall yield for farmers. According to an 1836 article from The Mechanics’ Magazine, Blair’s invention was conjectured to “save the labor of eight men.”

Two decades after Blair had filed his two patents, jealous slave owners fought to have slaves and freed slaves banned from filing patents, claiming that their ideas were the property of the masters and as a result of the labor imposed by their masters. By 1858, a law was passed revoking citizenship of slaves, consequently banning them from filing any patents. This law stayed in place until the end of the Civil War.

The reality of these laws passing has greatly affected many “black” farmers today. Land was lost due to not having the added value of sustainability to run their own land, due to it being against the law to create and patent products and machines when they were enslaved.

Jim Crow and sharecropping furthered the extension on the pain and disconnect of the power of the Black Indigenous farmer on the land.

Today, we are no longer bound by these laws, yet there is so much manufacturing to do to catch up. We have to become completely sustainable on the land, even with the haunting colonizing gentrifying threats.

Farmer Noah states that farmers need to be aware of their value and practice sustainability. To partner with non profit organizations but to not be co dependent on third parties. He speaks of the example of the ecosystem of ants, and how they aren’t intimidated by the size of their workload, their teamwork, and organization. These are keys for the survival of the modern innovative farmer, like Noah.

To protect his own future as a farmer, Noah builds with Chef Zu, a chef and herbalist who has been architecting added value products for farmers throughout Georgia. Together they created an herbal tea made with lemongrass grown by Farmer Noah. The tea is called Bodhi’s Tea blend, a healing blend of lemongrass, juniper berries, star anise, oolong tea and more!

We sat down with Farmer Noah to ask him some questions.

What type of support do you think would be most beneficial to black growers in Atlanta?

More of the community coming out to help on black owned farms and also marketing. Black farms need visibility! They need help with marketing and accessibility, an easy transition for volunteers/customers to be able to help them

What have been your most impactful lessons working with food organizations in Atlanta?

-food shortages are a lie, food is everywhere

– those who hate are really afraid

-we have to get back in tune, we’ve been taught to go against Mama Nature

How necessary is it for young black people to get involved with agriculture as producers and how do we go about encouraging them?

Vital and essential, of course social media but also by being real. Youth want to be in a space where they are respected and where they can receive support to grow

Would you please outline your experience in Atlanta food system?

Started at Truly Living Well, I worked with the summer camp for 3 years. After college I came to work on the farm full time for about 2 years. Then I started working with Gangstas to Growers and I have my own tincture business

What is your favorite plant to harvest?

Okra and pawpaws, any type of fruit

What advice can you leave the fellow youth who may consider becoming farmers in the future?

Be yourself and everything that comes with that. Trust and respect yourself. Heal any issues that you have in life. Honestly being an adult is a lie. Don’t be in a rush to grow up. This is the sacrificial generation, you may not have as much fun as those before you in their youth, but the gift is that we will develop our strength as a people to reconnect to our innovative and inventive spirit with the land.

products are valued at a little over $10 million compared to their white counterparts’ product valuation at over $5 billion.

To save our farms, we must reconnect with our indigenous roots and create sustainability. We are going to need to incorporate collaborative efforts to manufacture products from crops grown. Group efforts need to be incorporated to provide the funding for the initial investment of product cost, and funding for marketing. With a farm-share community effort mindset, like the ants, we will get the job done!