The Whole Foods Market located at 650 on Ponce De Leon Avenue, NE Atlanta, GA 30308 recently welcomed local farmers and vendors to their outdoors market for Wednesday sales from 4 to 8 pm. Although the Wednesday market has only been in existence for a little under a month, Roots Urban Growers Exchange (a neighborhood cooperative in South West Atlanta) led by the Good Shepherd Agro-Ecology Center has made its presence felt by being the premier stop for curious customers.

Indra Tobias (pictured left), Whole Food’s local vendor liaison, stated that Whole Food’s primary goal was to locate local vendors and bring them into the Market. Given that Whole Foods is seeking to better define their image as a community market, connecting with local farmers is key in demonstrating an interest in the community at large.  Ms. Tobias further explained that Whole Foods sought to make the project as seamless as possible by allowing the vendors to set up free of charge and retain all their proceeds.

“I’m currently in discussions to establish sample bins housed within Whole Foods that will sell residual items that aren’t completely sold during Wednesday’s outdoor market,” Ms. Tobias stated. “Ultimately we hope to form a relationship with local farmers and venders that may eventually lead to Whole Foods purchasing their products in bulk and selling within the store.”

As customers gleefully perused The Grower’s Exchange, they frequently complemented the market members on their exotic selection such as red okra and Swiss chard. Tiera Taylor, a local resident, stated that she only recently discovered in passing that local farmers sold their goods each Wednesday at Whole Foods outdoor market. Ms. Taylor mentioned that partnering with regional farmers was a positive step for Whole Foods Market because it offered customers another avenue to identify and legitimate the qual 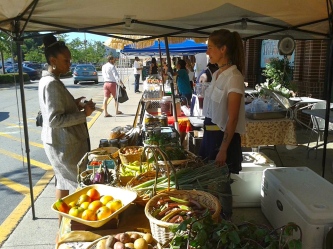 ity of their food source.

Daaiyah, another Whole Foods customer, cautiously approached the table as she apprehensively examined its produce. Mr. Cooke of the Good Shepherd Agro Ecology center noticed her trepidation and eagerly challenged her to enjoy a raw sample of red okra. After laughing in surprised delight, she eagerly purchased a pound of mixed okra and promised to visit again in the future.

Although most customers were just recently becoming familiar with the Growers market, they all echoed a similar sentiment, “We would definitely continue our support for local growers if their items were featured inside Whole Foods Market.”

Article written by Theresa Udoh. She can be reached at udoh.theresa123 at gmail.com